Rebelliousness is on the rise and I don’t care.  I’ll eat what I want, go where I want, do what I want and sleep in if I want.  So there.  Thbbbbbbbt!

I’m sure that no one else has ever had days like this.  I seem to be having a lot of them lately.  I think it comes from having to be overly responsible during 20 months of unemployment.  My shoestring budget was downgraded to a thread several months ago.  I’ve been sooooo good.  I haven’t got to the movies, gone out to eat or bought anything not in the budget.    That is really hard to do for extended periods of time and I’ve been at it for almost two years.

When I got up this morning, an overwhelming feeling of irresponsibility came over me .

I enjoyed oatmeal raisin cookies and milk for breakfast. I played outside with the dog and took a nap. 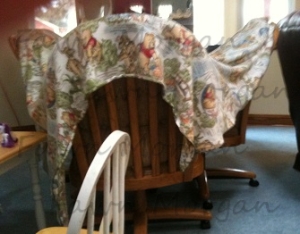 We built a fort out of chairs and a blanket.

Most of the day is now gone and I’m just getting started on the things I “need” to do as a “responsible” grownup.  How much will I get done?  Don’t know.  Don’t care.  Maybe I will call it a day, put on a movie and crochet my daughters Easter dress.

Sometimes playing hooky is important.  An occasional “mental health” day is required to unwind and rejuvenate.  The thing I like about mental health days is that it feels like I’m going to get into trouble for not being responsible.  That “hehehehehe” feeling of getting away with something.

Well, I think I’ve been working long enough.  At least two hours anyway.  I’m off to play somemore.  Have a great time!