I hope that all us Americans had a great 4th of July celebration.  At our house this usually means lots of family, food, fun and laughter.  Yesterday was no different except for the javelin throwing.

With the passing of my grandmother (the great-great-grandmother) a few years back my parents (the great-grandparents) are now the patriarch and the matriarch in our family.  While they are active and involved in all family activities they are also getting older and tire more quickly than us young uns.  They come down and participate, but when they are tired or feel the need for quiet they excuse themselves to the royal apartments.  There they are visited by individuals and small groups throughout the day.

This is the grownup group.  We are the parents and grandparents.  While we are still considered children we have taken over the planning and supervising of all family activities.  My older brother and I planned this BBQ, sent out the invites and the list of things to bring.  It is always a bring your own meat and a side dish to share because there are so many of us.  There is never a shortage of food and this years we did not coordinate well and ended up with lots of melon salad and watermelon.

When my family gets together we have an over abundance of children ranging from small babies to grownups.  Yesterday the youngest was a great-granddaughter about 20 months old and the oldest a grandchild of 31.  Since there were only three of the nine siblings attending yesterday’s event we only had 18 children under 18 and 8 children over 18.  Yes, I said only.  My parents have approximately 54 grandchildren and great-grandchildren in our family.  There are also three more on the way. 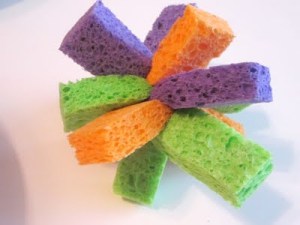 We usually have a water balloon fight, but with the number of required water balloons it has become a challenge to get them all filled. There is also the fact that it is over in a matter of minutes. This year I made spiky sponge balls and filled the wading pool.  This works much better, is more affective and easier to clean up.  The best part was the fact that the water fight (both of them) kept the children busy for at least two hours.  They were soaking wet and there were no fights about who had more water balloons and who didn’t get any.  The toddlers were able to play in the wading pool and participate in the throwing of water.

The most difficult part of the sponge balls was finding sponges without a scrubby side.  I had to go to four stores to find the number I needed and two of them didn’t have the sponges I was looking for.  The other two stores had barely enough.  I bought out the last store.

This was, I think, the most fun of all the games.  It was geared towards the biggest children and was easy enough that even my father participated.  Using water noodles for javelins and hula hoops we set up our range.  I was going to hang the hula hoops in our tree but the branches were shielded by leaves.  So we improvised.  I held a hula hoop in each hand and extended my arms out to the side.  Only my father was able to get the “javelin” through the hoops twice.  I got hit several times by my brothers because the noodles would not fly straight.  It was a lot of fun and quickly became competitive.  There were javelin throwing poses and a lot of groans for each miss.  However, as soon as the youngsters became involved the grownups quit.  This is a game we are definitely going to play on a regular basis.  Minus the children.

This is a tradition that we are quickly passing on our own children.  This year we only had three ice cream makers, but we still had a good variety of flavors.  We always have vanilla and then whatever other flavors we feel like concocting.  My daughter made raspberry ice cream which was the first to go.  My niece made chocolate and black cherry.  I, of course made the vanilla.  All flavors were rich, creamy and delicious.  There was very little left over.

With several of the western states currently on fire there has been limits put on fireworks.  Basically they are none outside city limits and no aerials at all.  We did a lot of sparklers and then a few (about ten) fireworks.  It was enough to satisfy the children and those who felt the need to play with matches.

Today I am totally exhausted and grateful for the little bit of rain.  I had made plans to take my daughter and her friends to the local water park, but since it is raining and thunder storms are predicted, I am not.  We are spending a quiet day at home playing games, watching movies and just relaxing.

The 4th of July has taken on new meaning since my sons serve in the army.  Thank you my sons and all who serve with you.

For a fund raiser