Now that I have regaled you with over the top adventures and massive amounts of stress, I have some really fun things to share.  Despite everything, some very wonderful things have happened in the last year.

Yes, it is plural.  I have had two grand-babies born within the last 10 months.  Oldest daughter had a 3rd child (a little girl) in March and Second Son had his 1st child (a little boy) just a couple of weeks ago.  Then over Christmas Oldest Daughter announced that she is having a surprise baby.  That makes 8 grand-babies with number 9 on the way.  I’m sooooooo excited!

I spent several months binge eating everything but what was healthy.  I had cookies for breakfast, chocolate and candy for snackage, chocolate milk for lunch and whatever else I felt like eating.  During this eating spree I was sleeping a lot and not very active.  You would think that I would gain at least 10 or 15 pounds.  I know that thought that because my pants were becoming uncomfortably snug.

According to the doctor’s scale I’d gained only 2 pounds.  2!  I could live with that.

Now that it is just Youngest and I to worry about my stress levels are so much lower.  I’m not listening for sounds of my mother falling.  I’m not worried about my sister’s state of mind.  I’m no longer in a place where family wanders through all the time interrupting my plans and messing up my schedules.  Though I do miss seeing them.

I can stay in my pajamas all day if I want to and there is no one to see (except Youngest and she doesn’t judge).  After school routines are more consistent and easier to keep.  Evenings are always quiet and rarely interrupted. 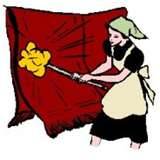 Cleaning a 900 square-foot apartment is much easier than cleaning a 7,000 square-foot house.  It definitely takes much less effort and time.  I can clean my entire apartment in less than an hour instead of the several it took to clean the house.

I don’t have to worry about shoveling snow off a driveway larger than my apartment, a large deck or a sidewalk.  I freely admit I do not miss shoveling snow.  Even with a snow blower it took almost an hour to clear our driveway.  By shovel it took a whole morning.  As long as it didn’t start to snow before the shoveling was completed.

It may have taken me a few months to appreciate my new life, but now I do.  I still miss having my mother around and I know Youngest misses her grandma.  My life is, however, wholly my own. For the 1st time in my life I have no one to answer to or justify my choices.  I think I like it.

2 thoughts on “Life Really Is Good”