So, my older brother and I have a long-standing joke that gets us funny looks.  If I’m irritating him (on purpose or otherwise) he looks at me and says, “I really wish you were puppies.”

What’s with the puppies?  I am the fourth of nine children. When my mother became pregnant with me my brother already had a brother and a sister.  He was  almost three and decided that he wanted puppies.  I obviously did not cooperated and he got another sister.

My seventh grandchild was born in March.  She is the youngest of three children with an older brother and an older sister.  Older sister was glad to have a sister because “brothers hurt.”  Older brother, on the other hand, totally ignored the baby for the first couple of weeks.  She did not exist and neither did the person holding her.

One Saturday they were visiting Grandma’s 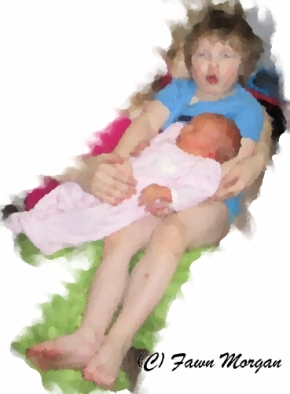 house.  I was playing with the baby who was about six weeks old.  Big brother came over and looked at little sister.  I asked him if he liked is little sister.  He grunted, said, “I don’t want her.” and walked away.  I laughed as little sister watched her big brother until he was out of her line of vision.

I’m glad to have big brothers.  As much as they angered, annoyed, teased and hassled me growing up I knew they were there for me.  They taught me to defend myself.  To talk to boys.  Protected me when necessary.

Now that my father is gone, I’m really glad I have big brothers to call on.